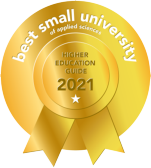 With its small scale and intensive counselling, Tio can offer you a custom made study programme.

The fact that Tio offers its students excellent counselling is clear from the fact that, for years, Tio has held the #1 position on the ranking list in terms of facilitating studying with an impairment. Tio offers personal customised education, giving the students an opportunity to excel. The lecturers encourage students to bring out the best in themselves - even if they are dyslexic, have a business to run or participate in a top sports programme. In all categories, Tio scores above the Dutch average and it also achieves the highest total score. Besides that, Tio offers students who want to excel more than enough challenge with a special honours programme.

Studying with an impairment

Do you have an impairment (e.g. dyslexia, dyscalculia, a physical handicap or a chronic disease) which might inhibit you in your studies? Tio will do everything it can to keep the hindrance to a minimum. You can report your impairment during your application. Your study coach will discuss with you which adjustments Tio can offer. Tio’s guidance to students with an impairment is highly valued. In the national survey conducted by the Centre for Higher Education Information (CHOI), Tio has earned the highest overall score in the Netherlands, for five years in a row.

What is an impairment?

An impairment (or disability) involves one or multiple visible or invisible disabilities resulting from a long-term or permanent physical or psychological condition.

The following types of impairments are recognised:

A disability is recognised on the basis of a statement (or any other form of evidence) supplied by a licenced professional.

Students with an impairment may experience limitations when conducting certain activities, for example:

The nature and severity of these limitations may affect the student’s physical and psychological wellbeing as well as their study career.

For the fifth year in a row, Tio has earned the #1 position on the ranking list when it comes to facilitating studying with an impairment. Tio won by a significant margin, being awarded the highest overall score of all universities of applied sciences in the Netherlands.

“The appreciation for Tio, a private school, remains very positive,” says the survey report. On a national level, Tio has the highest score in provision of information, tools and customisation of educational programmes.

Source: Report studying with an impairment 2017

This ranking list is based on the evaluations of students with a disability regarding the way they are supported, counselled and facilitated by their study course. These evaluations come from a separate handicap module that is part of the National Student Survey, a large-scale national survey among students of all universities and universities of applied sciences. The Centrum Hoger Onderwijs Informatie (CHOI, the Centre for Higher Education Information) researched the extent to which universities of applied sciences offer counselling for students with a disability such as dyslexia and dyscalculia.

Tio can offer you plenty of additional challenges. You can graduate in just three year. For talented students, Tio offers an honours programme worth 15 ECs per year. This programme gives you the opportunity to delve deeper into your chosen field, for example by taking (language) courses at a higher level or by participating in external competitions. You can also choose to expand your knowledge by taking an extra minor, or by following extra language courses or courses of another bachelor programme.

Are you a professional athlete? It is possible for you to extend your studies and schedule projects flexibly. Athletes with an A or B status or a high potential status from the NOC*NSF and athletes with an international talent profile fall under Tio’s top sports policy.
For more information, please visit one of the open days.

If you are an active entrepreneur in addition to being a student and if you have a Chamber of Commerce registration, you may be eligible for a customised programme, just like professional athletes. It is possible for you to extend your studies and schedule projects flexibly.
For more information, please visit one of the open days.

Tio’s contact with parent(s)/carer(s) is also tailored to everyone’s specific needs. When you sign up, you can enter your parents’/ carers’ email address, so Tio can keep them updated on e.g. your grades and attendance record. At least twice a year, you will have a study progress interview. With your consent, parents are welcome to attend these meetings. If you are a legal adult, we will not provide any specific information without your prior consent, in order to safe-guard your privacy.
For more information, please visit one of the open days.

Tio has small classes. The weighted average – measured across all Tio's locations – is 11 students per lecture.
Associate degreePrevious
Share
NextChecklist