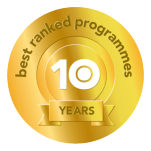 This is what companies say

Companies that attend the Tio Career Event to get to know the students and to tell them about the internship opportunities, praise our Tio students.

“The students are well-prepared and are very aware of what they're up to.”

“We have excellent experience with Tio interns so far. A number of interns stayed to work for us after their work placement was completed. Colleagues were initially very hesitant about taking on 15-week work placements, as that is really quite a short time. But Tio students make it work.”
Jolande Hartholt, Landgoed Duin- en Kruidberg

“Tio students are often more experienced and you entrust more to them.”
Roxy Zwering, Unlimited Label

“Tio students pick it up fast, generally speaking, are interested, very flexible when it comes to different tasks and have a sound general knowledge.”

“Tio interns are reliable: they arrive on time, complete their work placements and do what they agree to do. What's more, they generally have a pro-active attitude.”

“Tio interns are enthusiastic and flexible, we have a very good general impression of them, and they are well-prepared for what they want to learn. I've heard colleagues say that they can’t wait to get more Tio interns.”
Anja van Willegen, Albron

Wereldstage: “Curacao-based companies we collaborate with indicate that Tio interns are very keen, are well-prepared when starting their work placement and work hard.”

“We are very happy with our Tio students, they are passionate and know what they want.”

“Tio interns are serious and they always leave a good impression."

“With Tio interns, I see potential employees walking in.”
omoe Lin, The Dylan

“"Sometimes I think:" I wish I was looking for 5 interns instead of one.`
Tina Warnar, Bilderberg

“"The interns are versatile, diverse and flexible."

“Tio students are eager, ambitious and serious about his studies. "

“After the internship you say, "Please stay with us!" to the Tio student.”
Gemmeke de Jongh, Convention Bureau Brabant

“Our F&B manager was super enthusiastic about the Tio intern.”
Anne-Mieke Mulder,

TUIFly:  “Tio students are polite and (genuinely) interested. They carefully consider their choice of work placement.”

Carlson Wagonlit: “Tio students are interested and serious. And they ask good questions. They are very well prepared."

“I have seen a lot of good interns at the Career Event.”
Tina Warnar, Bilderberg

“I had fun working together with entrepreneurial Tio student.”
Bart Blikman,

“At Tio, I see lots of potential employees walking around.”
Komoe Lin, The Dylan

“The Tio students are well-prepared and very presentable.”
Nathalie Visser,

NH Hoteles: “I am impressed with the Tio students."

“We do not want to hand in this intern anymore!”
Sophie Leijsen, Regardz

“The students who did an internship at our company were super!”
Anne-Mieke Mulder, Casa 400 Amsterdam

“The Tio students have good knowledge and are interested."
Anne-Mieke Mulder, Casa 400 Amsterdam

“Tio students are curious, polite and enthusiastic, and know what kind of work placement they are looking for.”

"The students are well prepared and enthusiastic."
Rianne van Vliet, The Dylan

"Students are well-prepared, enthusiastic and keen to learn."
Aniël v